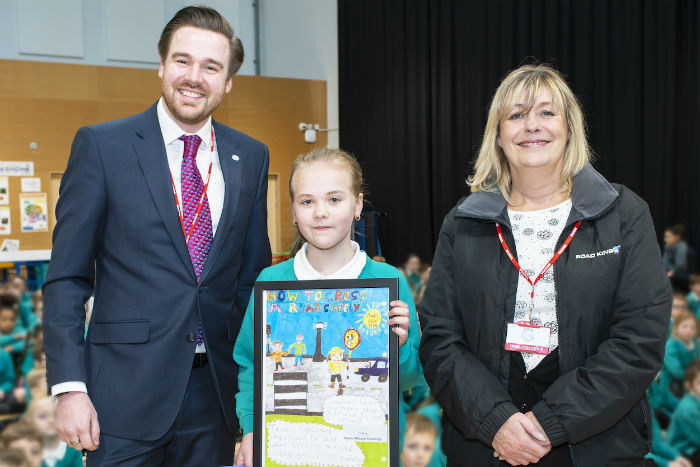 Pupils at Ysgol Cybi in Holyhead are helping raise awareness of road safety after being invited to participate in a poster competition by Certas Energy, the UK’s largest independent distributor of fuel and lubricants.

The competition, which challenged pupils to design a poster to highlight the need for safer lorry driving in the local area, was held to mark the opening of Certas Energy’s new HGV refuelling bunker site in Holyhead – the only such site in Anglesey.

The pupils’ designs are being showcased at Roadking’s Holyhead Truck Stop cafe and have been transformed into magnetic posters to be featured on the side of Certas Energy’s refuelling tanks at the site.

Ysgol Cybi Headmaster, Tristan Roberts, said: “Our pupils worked hard to design some very bright and creative road safety posters. A special congratulations goes to Felicity for her winning poster, which gave fantastic advice on how to be a safe road user.”

Andrew Goodwin, National Bunker Manager at Certas Energy, commented: “400,000 lorries and trailers pass through Holyhead port each year, so keeping local roads safe for everyone is a top priority for us. We’d like to say a big ‘thank you’ to everyone at Ygsol Cybi who took part – we saw some excellent entries and it was very difficult to narrow it down to just four winners.”

Certas Energy’s refuelling facility at Holyhead joins a network of 19 bunker sites across the UK. Located alongside the existing Roadking truck stop at Parc Cybi, the new refuelling site enables up to four trucks to refuel simultaneously at speeds of 120 litres a second.

For more information about our national network of bunkering facilities, please visit www.certasenergy.co.uk/fuel-cards-and-bunker-sites