This week NFU Mutual published its Rural Crime Report 2018 which revealed the rising costs of rural crime in the UK. The report estimated that roughly £44.5 million was lost to rural crime in 2017 alone, an increase of 13.4% compared to 2016.

Wales, the Midlands and South East of England were amongst the worst affected regions in the UK, having all experienced a year-on-year increase of over 30% – over 41% for Wales. To help combat theft of equipment, vehicles and livestock, the report cites a number of ‘medieval solutions’ being utilised on farms to protect assets, including earth banks and ditches, reinforced gates, high yard fences and barricaded strong rooms, to name a few. As noted in the report, these simple solutions become extremely effective when used with modern security measures like CCTV.

With rural crime at its highest since 2013, safety and security on farms has never been more important, or deserving of a spot on the national agenda.

Along with equipment and livestock theft, the agriculture industry also faces rising instances of fuel theft, leaving farmers thousands of pounds out of pocket every year. We work closely with farmers across the UK to help make their farms #fuelsafe: safe from spillages and contamination, secure against theft and always available.

Here, we explain how you can help ensure your fuel is #fuelsafe: 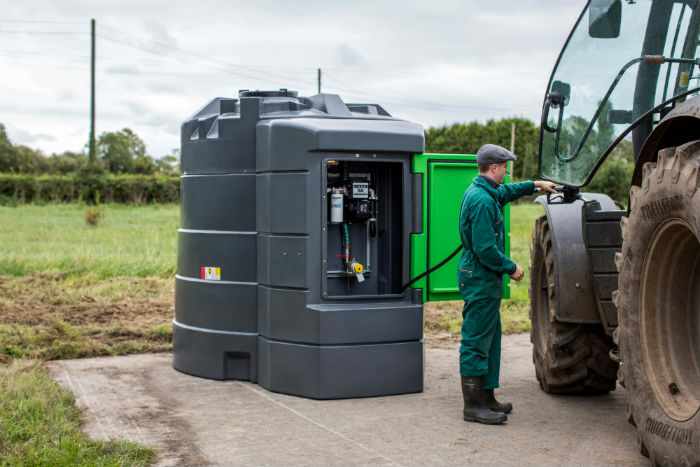 Keeping it secure and safe

Selecting the right tank that is safe and compliant is the first step to protecting fuel against theft. Providing a range of secure storage tank solutions in partnership with market leading suppliers, we can help safeguard your fuel supply. All of our tanks are 110% integrally bunded, providing extra protection with lockable fill points to prevent theft and spillages. Containerised tanks only allow access with FOBs and key codes and portable tanks are easy to move around and can be taken back to the farmyard and locked up when not in use.

Whatever tank you have, it’s vital that it is secured correctly. Unsecured fuel tanks are an easy target and are more prone to spillages, so here are several steps that can be taken to fortify your most precious liquid asset:

1. Hide and seek – wherever possible, ensure fuel tanks are kept away from prying eyes but don’t put them in a place that makes it difficult or dangerous to access.
2. Smile, you’re on camera – CCTV is becoming an ever popular deterrent and is highlighted as an effective addition to a farm’s security in the Rural Crime Report 2018.
3. Shine a light – high power beams, or indeed any amount of lighting can be enough to keep casual thieves at bay.
4. Sound the alarm – a tank alarm could be added to emit a piercing sound if thieves try their luck.
5. Upgrade your lock – most thieves will come with bolt croppers, so opt for close shackle padlocks or a tank with in-built locking mechanisms for the most resistance.

Fuel monitoring can help you to stay alert and vigilant to theft and spills by issuing an alert if there is a sudden drop in fuel level. Other benefits include:

• Full traceability and visibility – helps you to know how much stock has been purchased and how much is left.
• Extra fuel protection – sudden drop and leak alerts can help identify when damage has occurred or theft is in progress.
• Remote monitoring – save time travelling between different sites to monitor your fuel.
• Automated deliveries – being aware of fuel levels ensures you can plan ahead and fill up when required.
• Eliminate manual error – the high-level leak alarm gets rid of manual measurements and over-filling, saving time and money.
• Reduce insurance premiums – safer filling helps to reduce accident claims and cuts down on premiums.