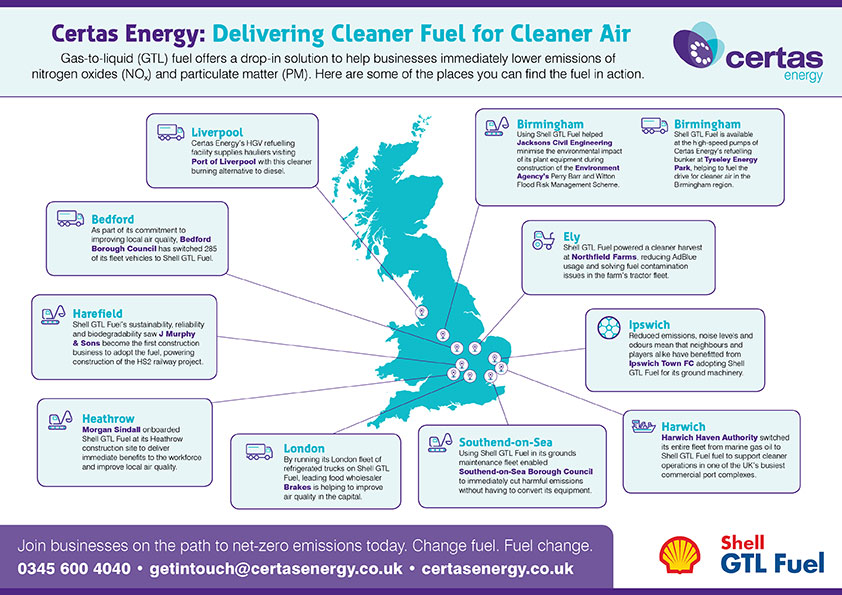 Created to deliver significant sustainability benefits, alternative liquid fuels have an important part to play in the move towards cleaner air. With Europe being at the forefront of the development of liquid fuels, the UK is in a prime position to benefit as demand grows for alternative energy sources to address the emissions problem.

Shell Gas To Liquid (GTL) Fuel – one of the few paraffinic fuels available in the UK – is already helping its early adopters transition to a cleaner fuel future. The fuel offers improved combustion properties inside diesel engines and lower emissions without the need for equipment modifications. To date, its uptake has largely been by commercial users and local authorities seeking to lower emissions in larger cities.

So, where are some of the high-profile applications of Shell GTL Fuel in the UK?

Leading construction and infrastructure company Morgan Sindall transitioned to Shell GTL Fuel at one of its sites at Heathrow to deliver immediate benefits to the workforce and improve local air quality. Further east, J Murphy & Sons – the first construction business in the UK to adopt Shell GTL Fuel – powered the diversion of high pressure gas pipes to facilitate the construction of the High Speed 2 (HS2) railway project.

From land to sea
Harwich Haven Authority (HHA), which oversees one of the UK’s largest and busiest commercial ports, has changed its entire fleet from marine gas oil to Shell GTL Fuel to help minimise its environmental impact. As a drop-in fuel, it could be used immediately in HHA’s vessels without needing to invest in any new machinery.

Southend-on-Sea Borough Council were able to cut emissions from its grounds maintenance and excavation fleet. Alongside reduced levels of harmful air pollutants, the cleaner-burning alternative has improved the uptime of the council’s plant machinery, eliminated exhaust odours and reduced operational noise levels.

Fuelling the Midlands Engine
With the economic regeneration of Birmingham well underway and an enhanced focus on clean air, the Midlands is a hotspot for the use of alternative fuels. As part of its search to find an alternative to diesel, Jackson Civil Engineering is currently fuelling in its plant equipment on Phase 2 of the Environment Agency’s Perry Barr & Witton flood risk management scheme, with Shell GTL Fuel.

As part of its joint venture with Bam Nuttall and VolkerFitzpatrick, Morgan Sindall is using the low emission fuel to refurbish Oldbury viaduct on the M5 in the West Midlands. The road is one of the busiest in the country, and the use of this alternative liquid fuel in the upgrade is helping to reduce the impact of construction works on the environment.

Discover why so many businesses have transitioned to liquid fuels to start them on the journey to net-zero emissions. Download part one of The New Energy Reality Series – ‘The Future of Liquid Fuels’ .